How Do Birds Conserve Energy During Flight? – Science ABC

Flapping wings is a very energy-consuming way to fly. The wings and the body of birds have an aerodynamic shape that allows them to glide and fly without having to constantly flap their wings. They also use air currents, and when flying with other birds, they use a ‘V’ formation to keep themselves up in the air with ease.
We look at birds, bats, and other animals capable of flight with a sense of undeniable envy.
When we observe a bird in flight, we’re usually stupefied, but at the same time, we’re buzzing with questions.
How do they lift off? How helpful are feathers in flight? What lets them reach such heights so effortlessly?
Each species of bird, with its own body shape, usually has a specialized set of aerodynamic capabilities that allow it to fly the way it does. Birds do have a general game plan when it comes to flight.
Birds primarily fly by beating or flapping their wings. This mode of flight has two distinct kinematic phases: the downstroke phase (the wings assume a downward motion) and the upstroke phase (the wings revert to their initial position).
Unlike human machines (i.e., airplanes), birds have strong wings with a wide range of motion. The range of motion of these wings varies across species. Hummingbirds, for example, can flap and rotate their wings an incredible 180 degrees. Their wings are so strong that they can flap non-stop in a steady figure-8 motion. 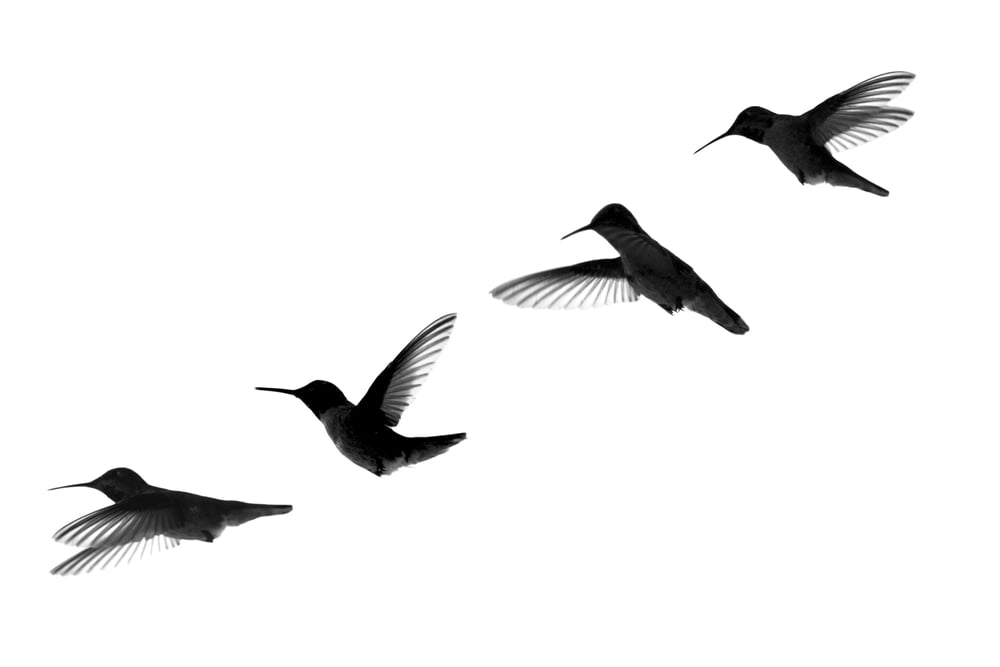 The kinematic phases of a hummingbird’s wingbeat. (Photo Credit : -AllanC/Shutterstock)

The kinematic phases of a hummingbird’s wingbeat. (Photo Credit : -AllanC/Shutterstock)
Conversely, flightless birds like emus and ostriches have extremely weak wings.
However these individual wings evolved, they evolved very well. Birds don’t just look elegant while flying, they’re also ridiculously efficient at it. How do they do this? Aerodynamics.

Simply put, aerodynamics refers to the movement of air around things. It explains how objects (planes) or living things (birds) fly.
All birds use some sort of aerodynamic tactics to conserve their energy. For example, birds can gain altitude very quickly by using energy from surrounding wind currents. When they glide, they position their wings in such a way that they can deflect the surrounding air downwards. This generates a physical force called “updraft”, which keeps them in the air without them needing to use any extra energy or excessively flap their wings. 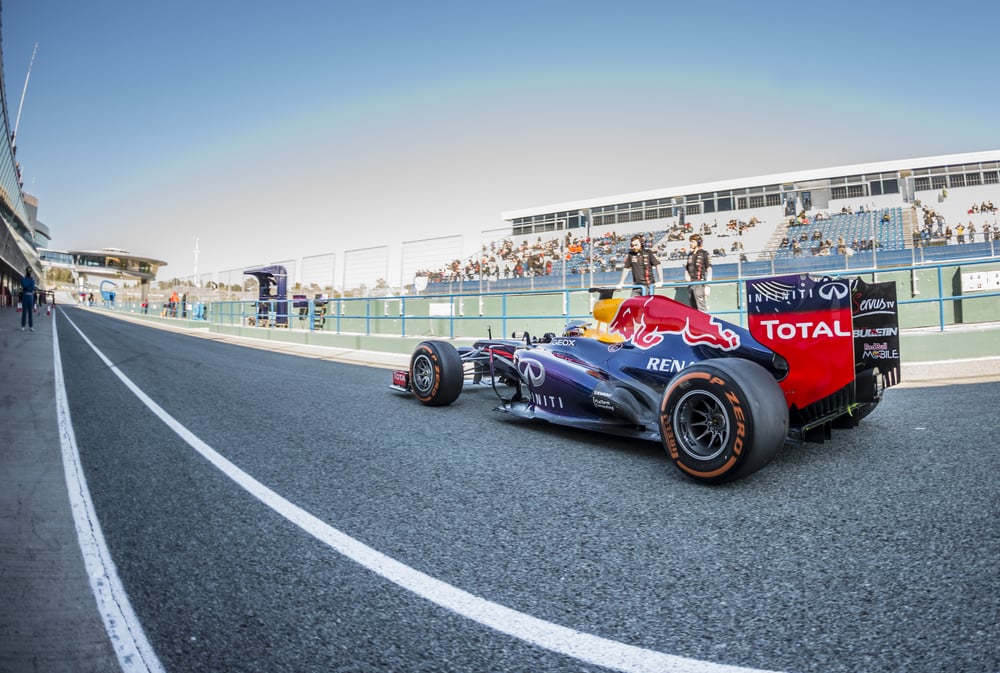 Birds aren’t the only things that use aerodynamics, F1 teams spend millions on aerodynamic research to build cars that can efficiently manipulate airflow and direct it to generate more downforce. (Photo Credit : -MrSegui/Shutterstock)

Birds aren’t the only things that use aerodynamics, F1 teams spend millions on aerodynamic research to build cars that can efficiently manipulate airflow and direct it to generate more downforce. (Photo Credit : -MrSegui/Shutterstock)
In fact, micro-differences in wing design allow different types of bird species to specialize in various modes of flight.
For example, seabirds, such as albatross, have absolutely massive wings. From end to end, their wings span 11 to 12 feet. They have the largest wingspan of any extant bird. They use their wings to channel updrafts (generated by the wind blowing over waves) to gain energy.
Also Read: How Do Birds Conserve Energy During Flight?
Additionally, albatross can glide for hours on end without a single flap of their wings and are the ultimate soaring birds. How do they do this? Thermals.
Albatross have quite a few tricks up their sleeve when it comes to using thermals. They engage in a mode of flight known as “dynamic soaring” over seas and huge stretches of oceans.
Dynamic soaring is an aerodynamic tactic that allows albatross to use surrounding wind flow and speeds to their advantage. They climb upwards using a thermal and slowly reach high altitudes. At these altitudes, the wind speeds are faster, so albatross fly in the same direction as the winds and gain more speed.
Thermals are physical phenomena. As the sun’s heat bears down on the ground it also bears down on the air directly above it and heats it. As the air continues to receive heat, small gusts of it start to rise.
Think about a bowl of water sitting on a stove. Bubbles form, move in random orientations, and eventually collide with each other.
Thermals form in a similar fashion. As these small gusts begin to rise, they eventually collide with each other and form bigger gusts of air until they’re large enough to be called a proper thermal.
These thermals keep rising and flowing with the surrounding winds, rising at 1-3 meters per second.
Albatross take advantage of them by hitching rides, using them to gain altitude. 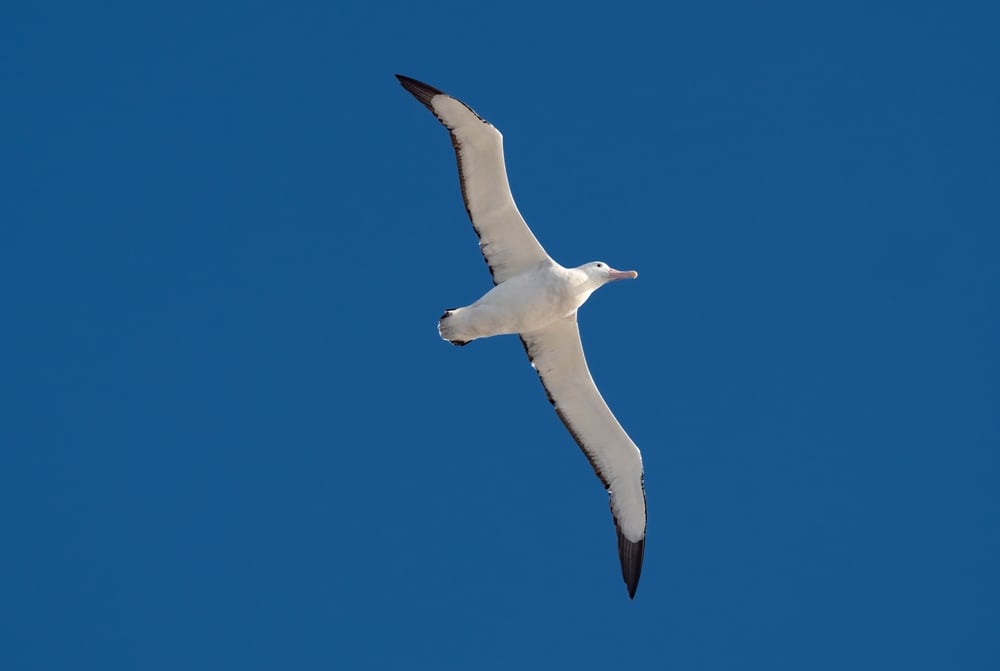 Albatross are often referenced in myths. Early sailors believed that killing an albatross would lead to bad weather during a voyage. (Photo Credit : -LouieLea/Shutterstock)

Albatross are often referenced in myths. Early sailors believed that killing an albatross would lead to bad weather during a voyage. (Photo Credit : -LouieLea/Shutterstock)
By the time they reach lower altitudes again, where the wind is slower, they have gained enough momentum to keep moving fast.
This lets them align themselves in the direction they want to travel, even when that direction is against the wind.
When they tire out and run dry of energy, they slow down and catch another thermal or gain energy from updrafts and it’s wash, rinse, and repeat. They begin the cycle all over again.
Albatross aren’t the only birds that use aerodynamic principles to their advantage. Flocks of American White Pelicans fly in a V-shaped formation (the Skein Formation) to conserve energy during migrations. 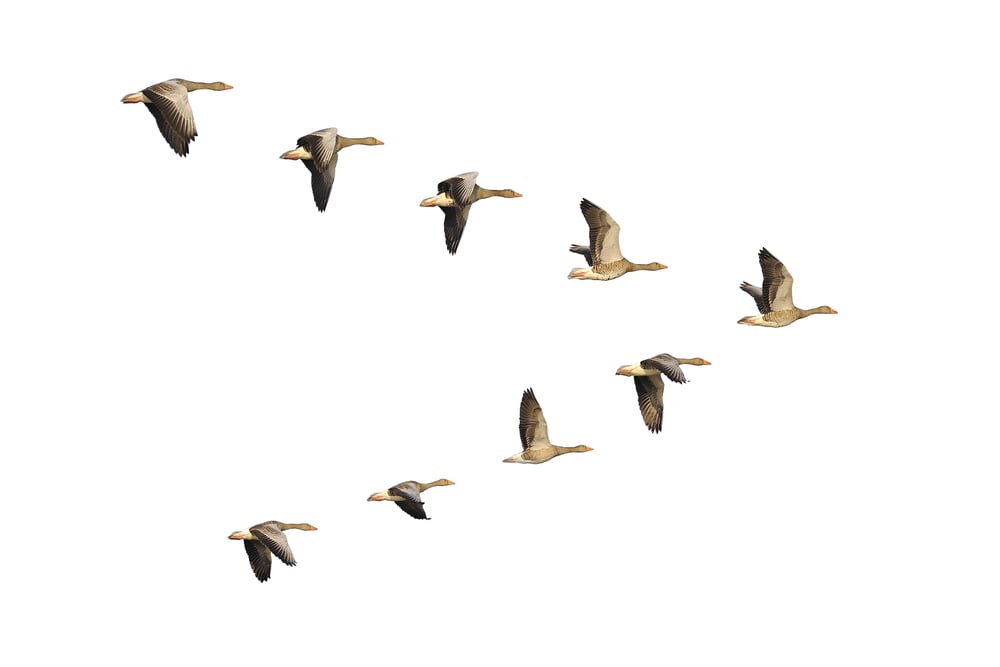 The “Leader” bird does not gain any lift when birds migrate in the Skein formation. (Photo Credit : -Ana Gram/Shutterstock)

The “Leader” bird does not gain any lift when birds migrate in the Skein formation. (Photo Credit : -Ana Gram/Shutterstock)
Also Read: How Do Birds Conserve Energy During Flight?
The separated feathers at the tip of each wing of the bird create tiny vortices. This phenomenon is known as a “wingtip vortex”. Each bird, except for the bird at the tip of the V (the leader), gains a bit of lift from the vortex created by the bird in front of it.
Similarly, large inland soaring birds like Condors use orographic updrafts. These air currents are formed when winds collide with mountains or buildings and change their direction to flow upwards.
Follow ScienceABC on Social Media:
WordPress database error: [You have an error in your SQL syntax; check the manual that corresponds to your MySQL server version for the right syntax to use near ')' at line 1]
select youtube_id,video_title,post_date,image_id from wp_videos where youtube_id in ()
ScienceABC participates in the Amazon Associates Program, affiliate advertising program designed to provide a means for sites to earn commissions by linking to Amazon. This means that whenever you buy a product on Amazon from a link on here, we get a small percentage of its price. That helps support ScienceABC with some money to maintain the site. Amazon and the Amazon logo are trademarks of Amazon.com, Inc. or its affiliates.