Experts stress dedicated house footwear and excluding wildlife from farms.
January 20, 2023
Benjamin Franklin once said, “An ounce of prevention is worth a pound of cure.”
Who would have thought 287 years later some people would reference Franklin’s famous quote in relation to current events? But when it comes to highly pathogenic avian influenza (HPAI), it makes perfect sense, said Georgie Cartanza, poultry Extension educator with University of Delaware Cooperative Extension.
That’s because most of last year’s cases — 80% confirmed through DNA testing — happened because of someone stepping in and bringing the virus into a house, she told a group of poultry growers at Delaware Ag Week in Harrington.
So, what ounce of prevention is most effective? Dedicated boots or disposable boots for each house, and foot baths at each door, are the best prevention measures.
“Meaning each house has its own pair, and it doesn’t leave the poultry house, never gets outside,” she said. “So set up a plastic container with a lid, put the shoes in there so it stays covered and not exposed. You travel from one house to another with different shoes.”
Foot baths offer an extra layer of virus transmission prevention, but remember that they are only for disinfecting footwear, not cleaning, she said. If any organic material is on your shoes, clean it off. Shoes with minimal tread are best to prevent litter and other materials from sticking.
If a cellphone is being brought into the house, or you are bringing tools in to fix something, they should all be cleaned and disinfected, she said. And if visitors are being brought in, hairnets, masks, coveralls, boots and gloves are essential, although limiting visitors during times of high virus transmissibility risk is probably best. 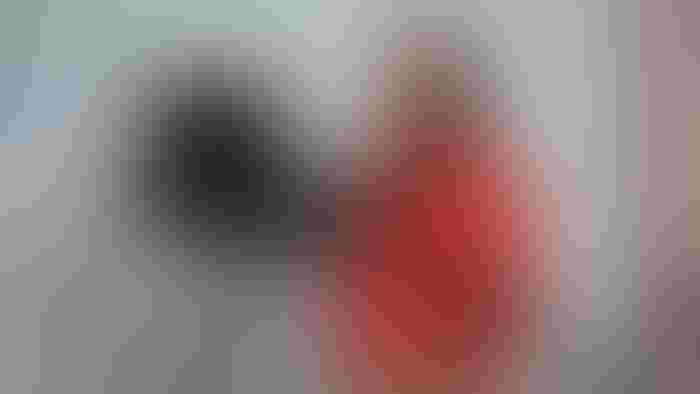 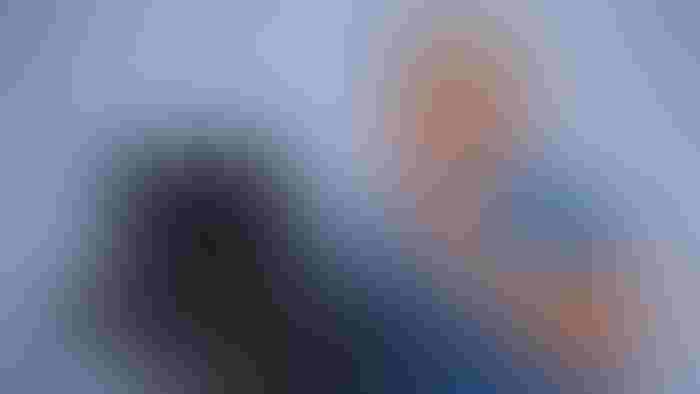 PREVENTING DISASTER: Georgie Cartanza, poultry Extension educator with University of Delaware Cooperative Extension, said dedicated boots or disposable boots for each house — and foot baths at each door — are the best prevention measures against HPAI.
Black vultures are the most susceptible bird of prey to HPAI, said Kevin Sullivan of USDA-APHIS in Maryland, adding that he has seen sites in the state with more than 500 dead vultures that later lab testing confirmed were infected with the current HPAI strain circulating.
Dozens of wild bird species are known carriers of the current HPAI strain, he said, from eagles to hawks, owls and many species of waterfowl. Labs right now are so overwhelmed from testing birds, he said, that any dead bird suspected of dying from virus is assumed to have died of HPAI.
“The key here is biosecurity” and exclusion, Sullivan said. “So, if we can keep the birds from getting into contact with your birds, just that much better.”
Mice, rabbits and other mammals have also been found to be disease carriers, so excluding any wild animal from possible food, water or shelter on the farm is important because that is what will attract them.
“Check your manure sheds, standing water, food, feed,” Sullivan said. “You have to identify and manipulate what attracts them, remove the sources that attract them.”
Using wire grids, predator decoys, scarecrows and other devices can be effective, but a combination of “scare tactics” is even better, he said. For example, effigies and decoys can be placed in a field or on a structure, but Sullivan said these rarely work by themselves unless they are followed up with some sort of hazing or harassment — such as mylar tape, propane cannons or even some pyrotechnics.
Except for eagles and endangered bird species, Sullivan said any hazing or harassing of birds can be done, legally, without a permit.
Removing nests of pigeons, starlings and house sparrows around poultry houses is allowed, too, he said, but most other birds are protected by the Migratory Bird Treaty Act, meaning any removal or hunting of these birds can only be done via permit.
And if you are hunting, Cartanza said to stay out of the poultry house for at least 48 hours to ensure virus doesn’t somehow trickle in.
Sullivan said the best way to get a permit, or to check a state's regulations regarding bird hunting or nest removal, is to contact the local USDA-APHIS office or any state game management agency.
Chris Torres
Editor, American Agriculturist
Chris Torres, editor of American Agriculturist, previously worked at Lancaster Farming, where he started in 2006 as a staff writer and later became regional editor. Torres is a seven-time winner of the Keystone Press Awards, handed out by the Pennsylvania Press Association, and he is a Pennsylvania State University graduate.
Torres says he wants American Agriculturist to be farmers' "go-to product, continuing the legacy and high standard (former American Agriculturist editor) John Vogel has set." Torres succeeds Vogel, who retired after 47 years with Farm Progress and its related publications.
"The news business is a challenging job," Torres says. "It makes you think outside your small box, and you have to formulate what the reader wants to see from the overall product. It's rewarding to see a nice product in the end."
Torres' family is based in Lebanon County, Pa. His wife grew up on a small farm in Berks County, Pa., where they raised corn, soybeans, feeder cattle and more. Torres and his wife are parents to three young boys.
You May Also Like
Wheat expansion to limit corn, soybean acreage growth in 2023
Your checklist for planter prep
Ag groups sue to stop WOTUS rule
Jan 20, 2023
Jan 19, 2023
Jan 19, 2023
Storm damage to Calif. strawberries nears $200m
New roads led to landslides in PNW
The cattle business is a story of statistics
7 ag stories you can't miss
Copyright © 2023. All rights reserved. Informa Markets, a trading division of Informa PLC.