Who owns the islands in Howe Sound? – North Shore News

Sign In
Register
At a glance, it’s just a rugged rock jutting out of Howe Sound, about a third of a hectare in size, 350 metres off of Lighthouse Park. If you squint your eyes from the shoreline you may be able to make out some birds, a Canadian Coast Guard navigational beacon, and not much else.
But West Grebe Islet is critical wildlife habitat, and it’s a marker of changing civil rights in Metro Vancouver. It’s also about to become West Vancouver’s newest park, and receive permanent ecological protection.
The story of the islet, and the patriarch of the family who donated it, can’t be fully told without a round of golf.
In 1900, Swedish settler Peter Larson purchased 223 acres of the area now known as Gleneagles from the Crown for $319. Larson established an orchard and farm there. By 1926, a little more than a decade after the area had been connected to Lower Lonsdale by the Pacific Great Eastern Railway, a group of investors bought most of the property with plans to build a nine-hole golf course and resort and subdivide the remaining land for development of new homes. They paid $75,000.
The course, and later the entire neighbourhood, took its name from a more famous Gleneagles in Scotland. Memberships at the club sold for $150 in its first year. The first hole-in-one was sunk by Mr. A. T. Finnie, according to a front-page story of the West Van News in March of 1928.
Much of the development around the golf course never came to be, and through the Great Depression and Second World War, the course became neglected.
But, in 1951, Esmond Lando, a Jewish Vancouver lawyer and entrepreneur, purchased the course with David Sears.
The Journal of the Jewish Historical Society of British Columbia recounted in a 2007 article what led Lando and Sears to make the purchase. Between 1941 and 1951, the Jewish population of Vancouver had grown from about 2,800 to 5,700. Golf was exploding in popularity in the post-war years, but Jews found themselves unwelcome on most courses, either by explicit rules at private clubs, or by more informal means.
“Anti-Semitism was an issue then and remains problematic today. It was an era when owning real estate in certain areas was still prohibited. Although there may not have been legal restrictive covenants, there surely was a bias. High society tacitly excluded Jews from its inner sanctum,” wrote Sarah H. Tobe for the journal. “Since there was … antipathy towards Jewish membership in private golf clubs throughout the metropolitan Vancouver area, the Jewish golfers were determined to establish a course of their own.”
Lando and Sears led a syndicate of Jewish golfers and investors to take the risk on purchasing Gleneagles. The club remained open to the public, but for the first time, the local Jewish community had a place to hit the links in peace.
“Gleneagles was open to anyone who met the qualifications of membership, regardless of race, creed or colour, and there were several non-Jewish members in the club,” Tobe wrote. “From what had originally been a defensive move, Jewish golfers were now enjoying comfort levels on their own course without anti-Semitic overtones.” 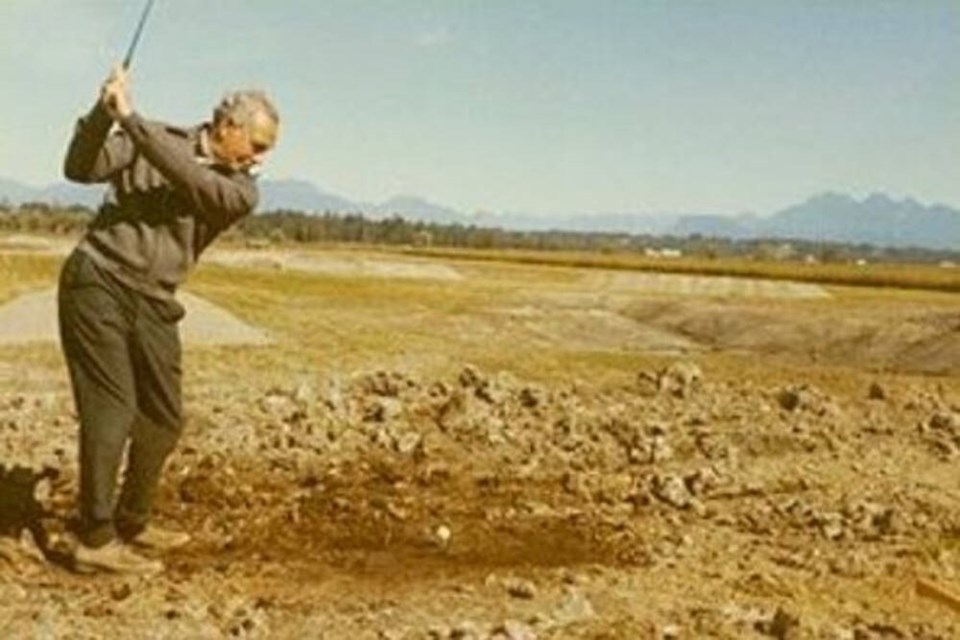 The club’s new owners and membership financed the course’s expansion and upgrades as well as construction of the clubhouse that still stands there today. But by 1958, the members were eager to sell the land so they could finance and build a proper 18-hole course in Richmond.
The West Vancouver council of the day wanted to see Gleneagles stay. After negotiations over the price and a 2453-248 vote by West Van residents, Gleneagles became the property of the municipality in 1958, for $350,000.
Lando went on to develop the Surrey Golf Course and Delta Golf Course. He founded businesses in aviation, logging and trucking, as well as his own law firm, which still exists today under a different name. He was also a patron of the arts (and an artist himself) and a generous donor to and volunteer for many humanitarian causes. He died in 1987 with a philanthropist’s reputation.
Now, more than 35 years later, his descendants wanted to make another contribution in his name. Among the holdings passed down by Lando was West Grebe Islet.
Lando’s daughter Barbara Schloss remembers her dad coming home sometime in the 1970s and telling them about it.
“He said, ‘I saw this beautiful piece of property. Absolutely gorgeous.’ And he said it has to stay that way forever,” she said. “He had incredible foresight. And I think he knew all about development, and he did not want it to happen there.”
Schloss said it wasn’t until the family had more recent inquiries from people who wanted to buy the islet that they decided to find a better long-term solution. One of Lando’s sons raised the possibility of donating it under the federal government’s ecological gift program.
The donation comes with a tax receipt for $256,000, a value that was determined by an independent third-party. But West Grebe Islet’s real value is as a cradle of biodiversity.
Birders have recorded 89 different species of birds that either inhabit the islet or make it part of their migratory pattern. The list includes black oyster catchers, turnstones, marbled murrelets and the rather rare harlequin duck. It’s also got one of the highest densities of surf scoters in the region.
Among those regularly spotted are a mated pair of eagles who nest on the mainland not far away, but come to perch on the Coast Guard’s light beacon.
“That’s their hunting grounds,” said Sally McDermott, co-ordinator of the North Shore Eagle Network. “They’re back and forth twice a day, three times a day.”
And the islet is surrounded by significant eelgrass beds, which provide critical habitat for fish and invertebrates, food for waterfowl, as well as protection against erosion.
And locals have referred to the islet as “Seal Rock” because there always seems to be a colony of the marine mammals enjoying the smorgasbord nearby.
“It’s a pretty important aspect of the marine ecology and of the Howe Sound region in general,” said Matt MacKinnon, district environmental manager for West Vancouver.
Because of its rocky nature, it’s very difficult to land a boat or kayak on the islet, which is mostly good news for the birds, many of which nest there.
With the current zoning and regulations, it’s unlikely anything could be built on the islet today, however the federal rules stipulate the recipient of the donated lands must retain them for their biodiversity and environmental values in perpetuity, meaning no development of any kind may happen on the islet.
“There’s some major penalties if something like that occurs,” said MacKinnon.
News of its donation is being warmly greeted by birders who like to train their spotting scopes on the islet.
“I love that place. It’s great,” said Rob Lyske, who has been going bird watching in the area for 20 years. “You see species out there that aren’t as easy to find from the shoreline all around Vancouver…. It will be good to see it set aside.”
As the name might suggest, there is also an East Grebe Islet, which remains privately owned.
Lyske and McDermott both said they would like to see both islets have guaranteed protection.
Sometime in the spring of 2023, district staff will go through the process of having West Grebe Islet formally dedicated as park land.
To recognize the contributions of Lando and his family, the district will be installing two plaques – one at the Gleneagles Golf Course and one at a viewpoint where the islet can be seen.
Schloss said her father knew West Grebe Islet was special, but she said he likely had no idea how important it was to the Howe Sound environment. Handing the islet to the district completes a task her father set out to do more than 50 years ago, she added.
“We thought ‘What a legacy for our father,’” she said. “He really did have something special in his heart for West Vancouver.”
© 2022 North Shore News