Kareena Kapoor, Saif Ali Khan and their family celebrated Sharmila Tagore’s birthday in Jaisalmer. Taimur, Jeh and Inaaya also spent some time by the lake!
Kareena Kapoor Khan, Saif Ali Khan, and their kids Taimur Ali Khan and Jeh Ali Khan were in Jaisalmer a few days ago, where they celebrated Sharmila Tagore’s 78th birthday. Saba Ali Khan, Soha Ali Khan and her daughter Inaaya Naumi Kemmu were also present at Sharmila Tagore’s birthday celebration. Looks like the Pataudi family had a blast in Jaisalmer and pictures of them enjoying a camel ride, puppet dance, and more went viral on social media. Saif’s sister Saba Ali Khan has been sharing glimpses from their time in Jaisalmer. The latest picture shared by her shows Taimur, Jeh and Inaaya chilling by the lake, where they spotted some birds.
Saba Ali Khan took to her Instagram story to post a picture that shows Taimur, Jeh, and Inaaya chilling by the lake with their aunt. The picture shows them basking in the winter sun, and skipping stones across the water. Taimur can be seen in the centre, in a long-sleeved white t-short paired with grey jeans, while Inaaya looks pretty in an orange frock and a white hat. Little Jeh is seen in a white tee, jeans and a blue cap.
In her caption, Saba Ali Khan wrote that Taimur, Jeh and Inaaya were bored, which is why they headed to the lake to look for frogs and fishes. While they couldn’t see frogs, they spotted some birds instead. “Chilling at the lake…! Kids were bored.. so was their aunt!! So we decided to go find frogs n fishes … spotted some birds instead. No I don’t mean bebo n ma They stayed behind!” she wrote. Saba shared the picture and shared it along with a sticker that read, “Lake Life.” Check out the picture below. 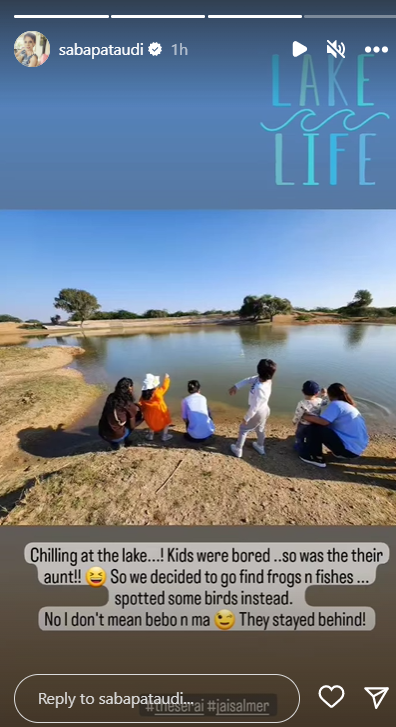 On Saturday, Kareena Kapoor Khan, Saif Ali Khan, and their kids Taimur and Jeh were spotted at the Mumbai airport as they returned after celebrating Sharmila Tagore’s birthday in Jaisalmer. Kareena and Saif were seen smiling and enjoying a conversation as they made their way toward the exit.
ALSO READ: Taimur Ali Khan, Inaaya Naumi Kemmu cut cake with ‘badi amma’ Sharmila Tagore; Kareena shares PICS
Bonafide Bollywood lover with over 3 years of experience in the entertainment industry. Though Lubna studied architectur…, her love for all things glitzy made her opt for entertainment journalism. She has a keen eye for everything hot and trending in B-Town. When not working, you’ll find her binging cringe reality shows and crime documentaries. Read more