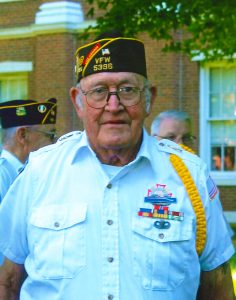 Mr. Nelson Wayne Mathews, age 84, of Vevay, Indiana, entered this life on February 17, 1938 in Switzerland County, Indiana. He was the loving son of the late, James Cecil “Petie” and Hazel Louise (Ferguson) Mathews. He was raised in Switzerland County, Indiana on Mathews Road and was a 1956 graduate of the Vevay High School. Nelson was inducted into the United States Army on September 5, 1961 in Louisville, Kentucky. He received the Sharpshooter Rifle M-1 Badge, Marksman Carbine Badge and the Driver and Mechanic Badge with One Bar. He served overseas in the Vietnam War for one year, six months and eleven days. Nelson was later transferred to the United States Army Reserves in Oakland, California. He was honorably discharged with the rank of Specialist 4th Class on August 31, 1967. On July 1, 1960, Nelson was united in marriage to Betty Jean Riley. This happy union of over 62 years was blessed with six children. At the young age of 18, Nelson was employed for Barber Grocery in Madison, Indiana until 1974. He was later employed for Schinley Distillery in Lawrenceburg, Indiana for a year and worked on the Markland Dam for several years. Nelson was later employed as a machine operator for Kentucky Utilities, retiring in 2000, after 15 years of service. Nelson was a member of the Vevay American Legion Post #185 and was a lifetime member of the Vevay VFW Post #5396. Nelson was also very active on the Honor Guard and was a member of the National Rifle Association. Nelson enjoyed farming, hunting and tractor pulling, as well as, bird watching and feeding the birds and squirrels. You could always find Nelson sitting outside in his garage, welding or working on farm equipment. He also loved chatting with his friends and neighbors. Nelson passed away with his loving family by his side at 9:30 p.m., Thursday, November 10, 2022, at his son’s residence in Vevay, Indiana.
Nelson will be lovingly remembered by his wife, Betty Jean (Riley) Mathews of Vevay, IN; his children, Terry Wayne Mathews and his companion, David Berkoff of Indianapolis, IN, Gerri Lou Liter and her husband, Gary of Madison, IN, Rodney Lee Mathews of Vevay, IN, Jack Alan Mathews and his wife, Stacey of Vevay, IN and Jeanne Kay Harris and her husband, Ronnie of Vevay, IN; his grandchildren, Kelsy (Daniel) Jackson, Allie Mathews, Makenzie (Vince) Mathews, Delany Liter, Devin Lee Harris, Ainsly Liter, and Makayla Harris; his great-grandchild, Finlee Jackson; his sisters, Edith Mae Gibbs and her husband, Eddie of Louisville, KY, Bonnie Detraz and her husband, Edsel of Vevay, IN, Phyllis Christman of Bennington, IN, Sharon Johnson and her husband, Dave of Madison, IN, Kathy Scott of Toccoa, GA and Linda Ricketts and her husband, Larry of Edinburgh, IN; her brothers, Raymond “Bimbo” Mathews and his wife, Bonnie of Madison, IN, Mickey Mathews and his wife, Bev of Patriot, IN and Jim Mathews of Vevay, IN and his numerous nieces, nephews and cousins.
He was preceded in death by his parents, James Cecil “Petie” and Hazel Louise (Ferguson) Mathews; his infant daughter, Jill Aileen Mathews; his brother, Otis Henry Mathews; his sister, Wanda Sullivan and his brothers-in-law, Eddie Gibbs, Grady Scott and Ronald Christman.
Visitation will be held from 4:00 p.m. – 8:00 p.m., Wednesday, November 16, 2022 at the Haskell & Morrison Funeral Home, 208 Ferry Street, Vevay, Indiana 47043.
Funeral services will be conducted at 11:00 a.m., Thursday, November 17, 2022, by Pastor Mike Barnes, at the Haskell & Morrison Funeral Home, 208 Ferry Street, Vevay, Indiana 47043.
Interment and full military rites will be conducted by the Honor Guard of the Vevay American Legion Post #185 and the Vevay VFW Post #5396 in the Vevay Cemetery, Vevay, Indiana.
Memorial contributions may be made to the Vevay American Legion Post #185 or Vevay VFW Post #5396. Cards are available at the funeral home or online at www.haskellandmorrison.com
JCD splits with Southwestern (Hanover) in boys middle school hoops
Registration now open for 2023 Polar Plunge benefitting Special Olympics
WRBI Radio
133 S. Main Street, Batesville, IN 47006
812-934-5111 | Contact Us
Decatur County Toll Free 812-222-8000
Copyright © Leeson Media LLC. All rights reserved. Web Development by World Wide Web Worx