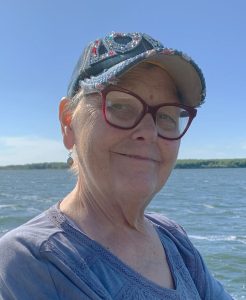 Carolyn D. Rust, 75, of Glenwood, earned her wings on Nov. 4, 2022. After a challenging year with dialysis and other health concerns she decided that fighting the battles was too much and now she joyfully walks with Jesus. While there is an emptiness in our hearts, we know that her prayer was answered.
A memorial service celebrating her life will be held at 11 a.m. on Nov. 14 at Chippewa Falls Lutheran Church with Pastor Brenda Boogren officiating. Visitation will be held on Sunday, Nov. 13, from 4-6 p.m. at the Hoplin-Hitchcock Funeral Home in Glenwood and will continue one hour prior to the service at the church. Inurnment will be in the Chippewa Falls Lutheran Cemetery. Arrangements are with the Hoplin-Hitchcock Funeral Home in Glenwood.
Carolyn Diane Rinken was born on Nov. 10, 1946, in Charleston, S.C., to Arnold and Virgy (Eskelson) Rinken.  Arnold was stationed in South Carolina as he served our country. Carolyn is the oldest of six children and took that role very seriously her entire life. A role that formed her strong work ethic, love of God, being a good steward of the earth her entire life. She grew up on the family farm south of Sedan. She is a lifelong member of Chippewa Falls Lutheran Church in Terrace. She attended school in Glenwood and graduated high school in 1965. Her education continued as she moved to Minneapolis and attended Lutheran Bible Institute (LBI) and earned a degree in Parish Work. She continued to live in the metro, working various jobs during and after LBI, including the U.S. Post Office, Billy Graham Evangelistic Association and an accounting firm.
On April 12, 1969, she married Harvey D. Rust at Chippewa Falls Lutheran Church. To this love story three children completed their immediate family, Carmen D. (K!) in 1970, Shane D. in 1972 and Kyle T. in 1975. Carolyn and Harvey purchased a farm near Terrace and worked together to build their home and their livelihood as they farmed, operated a construction business and raised their children. During this era, Carolyn was very active in her community and her church. She was the youth director for over 40 years and took tremendous joy teaching and working with youth. Her passion of making life experiences possible included canoe trips, weekend retreats at the family cabin, chaperoning youth to National Lutheran Youth conventions, backpacking trips to Rocky and Cascade mountains – to name a few.
In 1988, Carolyn received an associate degree in computer programing through Alexandria Technical College. This accomplishment began her over 15-year employment with Dairyland Computer of Glenwood.
Carolyn loved her children deeply and was very involved in their lives but when she was blessed with grandchildren, Cody (1997), Eli (2007) and Jed (2009), a whole new level of love and support and protective instincts grew in her heart and soul. She held much pride for her grandsons and spent as much time as possible sharing her stories, family history, favorite recipes, supporting their interests. She welcomed a granddaughter into the family with open arms as Cody and Mariah (Heinze) married in 2021.
Carolyn loved traveling and enjoyed several trips to Norway (diving into genealogy), Australia and multiple spots across the U.S. throughout the years. Cherished pastimes and passions include gardening, bird watching/feeding, hosting family gatherings, motorcycle rides, camping, campfires, organizing Easter egg hunts with kite flying, scrapbooking, photography, four wheeling, “from scratch” cooking, attending theater productions (local to Broadway!) and deep study of the Bible – she loved to be part of learning and discussing the Bible.
Carolyn is survived by her mother, Virgy Rinken; her husband, Harvey; children, Shane (Stephanie Eli) and Kyle (Holly Klein); son-in-law, James Bergman; grandchildren, Cody (Mariah), Eli and Jed; sisters, Gail Pasche (Dale), Susan Wink, Julie Tart (Ralph) and Robin Robinson (Travis); brother, Steven (Jodi) Rinken; along with many dearly loved nieces and nephews.
She was preceded in death her father, Arnold Rinken, and daughter, Carmen Rust (K!), both in 2018; and brother-in-law, Mike Wink.
Carolyn was an organ recipient in 2012 which provided several more years of improved health and was a donor upon her death. Life springs from death, sorrow turns to hope and a terrible loss becomes a gift.
To send online condolences, visit hoplinhitchcockfuneralhome.com and click on obituaries.
The Pope County Tribune has been serving Pope County since 1920. We are the legal newspaper for the city of Glenwood, Minnewaska Area School District and Pope County.
Pope County Tribune
14 First Avenue Southeast
Glenwood MN 56334
320-634-4571
Copyright © 2022 Pope County Tribune. All Rights Reserved.
Built by BOOST Creative
Don’t have an account?
Subscribe Now!
Already a print subscriber? Click here.