Listen Live
The chimney swift bird population has experienced a steady decline, with the most recent data from the North American Breeding Bird Survey showing a 72 percent drop over the last 50 years.
Greg Schechter (CC BY)
They orbit chimneys, swirling around and chasing after one another. Soaring through the air, they forage insects and pests. But when dusk strikes the clock, they settle back home. All at once, they circle inward like a cyclone and land in old, tall brick chimneys.
“There’s nothing like it in nature,” said Nancy Nabak, chair of the Wisconsin Chimney Working Group, an environmental conservation group. “It increases our sense of awe, of why we’re alive and the amazing things we experienced.”
As they migrate to South America each fall, chimney swifts gather and swoop down into chimneys they are using as communal roosting spots. Every year, groups of birdwatchers come together to watch at events called “Swift Night Out.”
Swift Night Out gatherings are being held around the state, including in Madison, in early September.
Like many bird species, chimney swifts are on the decline. Their population in Wisconsin fell 72 percent over the last 50 years, according to the most recent data findings by the North American Breeding Bird Survey. While they are not listed as endangered, their dwindling population is a concern for scientists and bird-lovers. 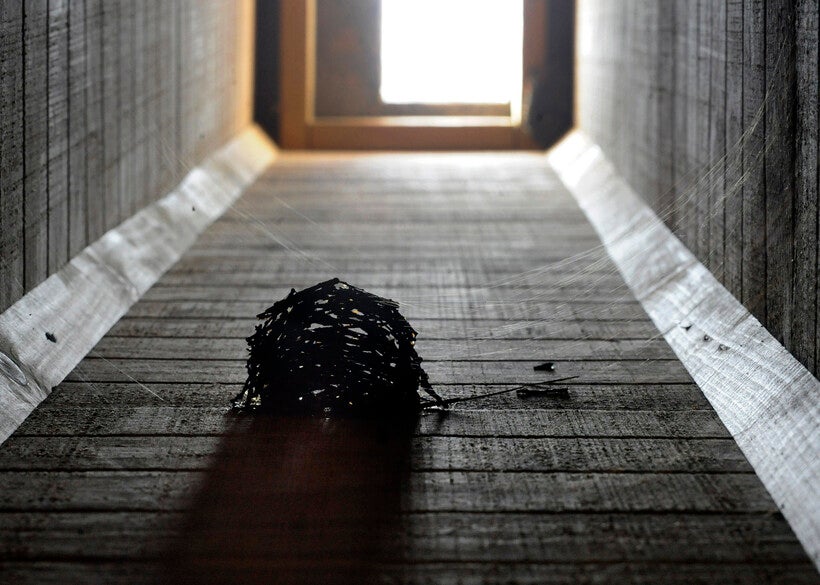 In this Wednesday, Oct. 9, 2019 photo, a chimney swift nest surrounded by spider webs is shown clinging to the inside of a fake chimney built as habitat for the birds in Birmingham, Ala. Fake chimneys provide nesting spots and migration motels for chimney swifts, which can rest only by using their toes as grappling hooks to hang from rough, vertical surfaces. Jay Reeves/AP Photo

In this Wednesday, Oct. 9, 2019 photo, a chimney swift nest surrounded by spider webs is shown clinging to the inside of a fake chimney built as habitat for the birds in Birmingham, Ala. Fake chimneys provide nesting spots and migration motels for chimney swifts, which can rest only by using their toes as grappling hooks to hang from rough, vertical surfaces. Jay Reeves/AP Photo
Experts believe a decline in insect prey, climate change and a shortage of chimneys are contributing to the decreasing swift population in various ways.
“It’s a puzzling, probably multi-faceted problem, and getting a handle on it is tough, but it’s not just chimney swifts that are declining,” said Anna Pidgeon, a University of Wisconsin-Madison professor in forest and wildlife ecology.
“Birds that depend on insects solely for their food for the whole annual cycle are declining as a group. Swifts are not maybe a flagship, but an important one,” Pidgeon said. “They’re pretty conspicuous, and they’re conspicuous in their decline as well.”

One important factor researchers are examining is the swifts’ withering food source: insects.
Pidgeon noted that when the pesticide DDT was introduced in the late 1940s, the swift diet changed. One study found it “dramatically altered insect community structure by the 1960s, triggering nutritional consequences for swifts and other aerial insectivores.”
The pesticide was banned in 1972. But outside of the United States, Pidgeon said that the effects of DDT can still be felt as the swifts migrate.
“Some of the countries that chimney swift pass through on their way to northwest South America, in the nonbreeding season, may still be using DDT,” she said, adding that other insecticides affect different agricultural areas. 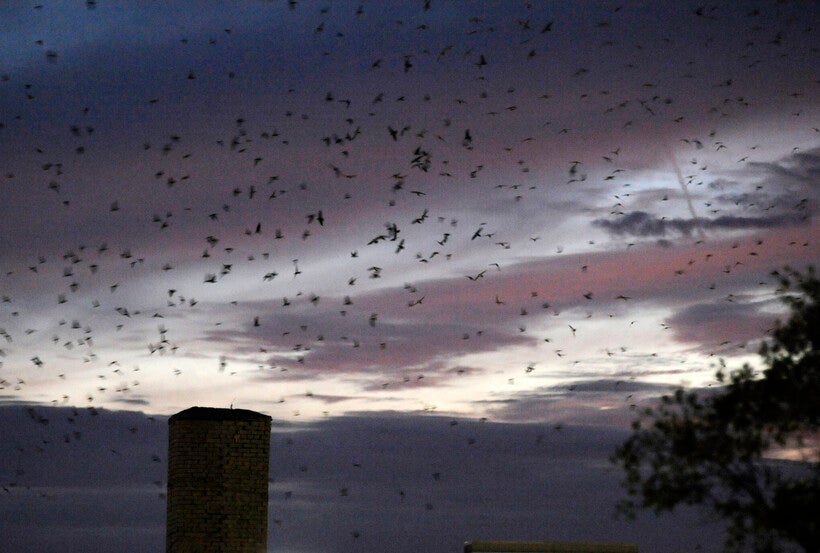 In this Monday, Oct. 7, 2019 photo, hundreds of chimney swifts circle around a chimney where they will spend the night in Birmingham, Ala. Jay Reeves/AP Photo

In this Monday, Oct. 7, 2019 photo, hundreds of chimney swifts circle around a chimney where they will spend the night in Birmingham, Ala. Jay Reeves/AP Photo
In addition to a declining insect population, chimney swift birds are facing a shortage of nesting chimneys and extreme weather conditions.
“We have good evidence that pesticides have caused problems, and we suspect that habitat loss and climate change may also be a factor,” said Stanley Temple, an emeritus professor at UW-Madison and a senior fellow at the Aldo Leopold Foundation.
Since the North American Breeding Bird Survey was first introduced in 1966, chimney swifts have declined by about 2.5 percent each year. In Wisconsin, they’ve declined by about 1.5 percent annually.
Nabak, of the Wisconsin Chimney Working Group, said migration is particularly perilous for the birds, and that it has become more difficult due to climate change. 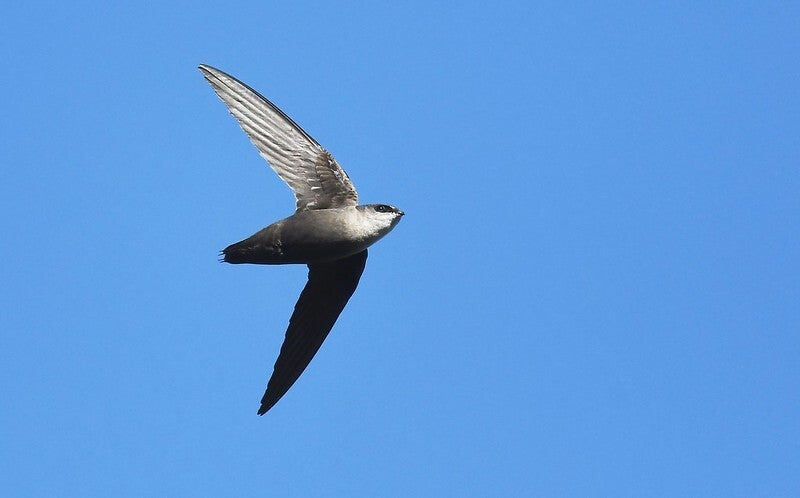 Andy Reago & Chrissy McClarren (CC BY 2.0)
“It’s a very dangerous time,” Nabak said. “They’ve got to go thousands of miles, possibly during stormy weather patterns, and there are many documented cases where birds have faced mortality because of a major storm or hurricane or something else.”
Such weather events are becoming more intense and frequent, but Temple said that it’s not yet clear whether chimney swift exposure to these are causing their steady decline. In any event, it may be a “tenuous” link, given that other bird species face these events but are not declining, he noted.
Rather, the real mystery, Temple said, happens during the winter months, when they are much more difficult to study.
Yet one potential issue brought by climate change is a “disconnect” between different extreme weather, Pidgeon said.
Richard Staffen, a Wisconsin Department of Natural Resources zoologist and conservation biologist, said the timing of the chimney swift migration does not always match the peak season to forage insects and feed their young.
He and the Wisconsin Chimney Working Group are urging the public to maintain chimneys and count and log any birds they see to help them preserve the population. 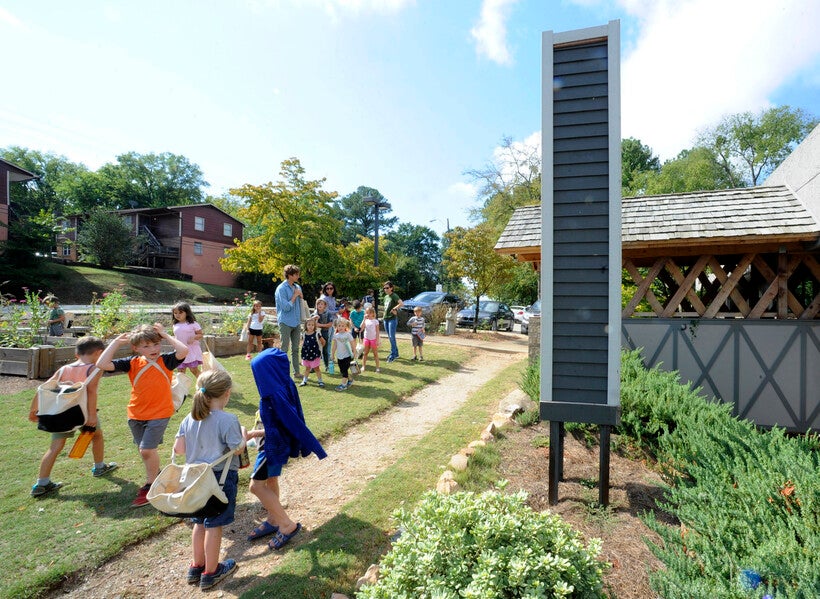 In this Wednesday, Oct. 9, 2019 photo, schoolchildren gather near a fake chimney meant as a nesting structure for chimney swifts in Birmingham, Ala. Jay Reeves/AP Photo

In this Wednesday, Oct. 9, 2019 photo, schoolchildren gather near a fake chimney meant as a nesting structure for chimney swifts in Birmingham, Ala. Jay Reeves/AP Photo
Staffen said the DNR is exploring solutions, such as building swift towers that replicate chimneys. He stressed that chimney swifts are unique and interesting birds because they fly into urban areas, where some people don’t have the opportunity to see wildlife.
“It kind of speaks to the health of those urban areas and cities. If there’s good insects still available, there’s gonna be aerial insectivores like chimney swifts still around,” he said.
Pidgeon spoke of a friend who works for the Forest Service on the north shore of Lake Superior. The local high school was planning to remove the chimney, but she worked with them to create a replica and, in turn, a roosting site.
In a similar capacity, the Wisconsin Chimney Swift Working Group partnered with the U.S Fish and Wildlife Service last year to invest in a pilot project, repairing a chimney at the Vernon County Historical Museum in Viroqua.
“If we hadn’t done that there was a good chance that chimney would have been lost,” Nabak said. “That’s home, that’s habitat for hundreds of swifts.”
Staffen added that chimney swifts typically nest between May and September, when chimneys and fireplaces are rarely used. He recommended closing the damper on the chimney to keep them from falling down or coming into the house.
He and the Wisconsin Chimney Swift Working Group are urging the public to maintain chimneys, count and log any birds they see to help them preserve the population.

For documenting the number of swifts entering a chimney, the DNR recommends submitting data to eBird.org.
“If you can count, that’s all you have to do. You don’t even need binoculars,” Nabak of the Wisconsin Chimney Working Group said. “Everyone can make a difference.”
As the chimney swift population declines, many observers still find beauty watching them flit to roosting chimneys, which attract hundreds to thousands of birds.
Staffen compared it to the “olden days,” when people imagine clouds of birds flying overhead.
“It’s kind of like that on a somewhat smaller scale, but to just see the sheer number of birds still around is really cool,” he said.
View the discussion thread.
Sponsored by:
Become a WPR Sponsor
Sponsored by:
Become a WPR Sponsor
Wisconsin Public Radio
For questions or comments, contact WPR’s Audience Services at 1-800-747-7444, email listener@wpr.org or use our Listener Feedback form.
Find out how to Support WPR.
View our privacy policy.
© 2022 by Wisconsin Public Radio, a service of the Wisconsin Educational Communications Board and the University of Wisconsin-Madison.