© 2022 WWB Holdings, LLC. All rights reserved
July 28, 2022
A dead sand tiger shark was found Thursday morning along the beach at 12th Avenue in Longport, New Jersey. Also known as grey nurse sharks, the species is common off the Atlantic coastline.
Right on cue for Shark Week, some beachgoers at the Jersey Shore got a grisly lesson from nature on Thursday morning.
A man taking a stroll in Longport at the 12th Avenue beach spotted the unmistakable form of a shark's body in the surf. It was around 7:00 a.m. and a few other people on the quiet beach noticed the animal, too.
"It was pretty easy to locate, considering it was huge," the man said, asking not to be identified. "I just walked over and noticed that one side of the shark looked a bit more gruesome."
The man shared two photos of the shark, which he estimated to be about 8 or 9 feet long. One photo shows the shark had a large gash, running most of the length of its belly and exposing some of its internal organs.
"There were a ton of birds, and usually I don't see them in the morning," the man said. "There had to be about 20 birds eating some of the remains that were to the side of the shark."
The man said he called Longport police, who sent over a large truck to remove the dead shark from the beach. 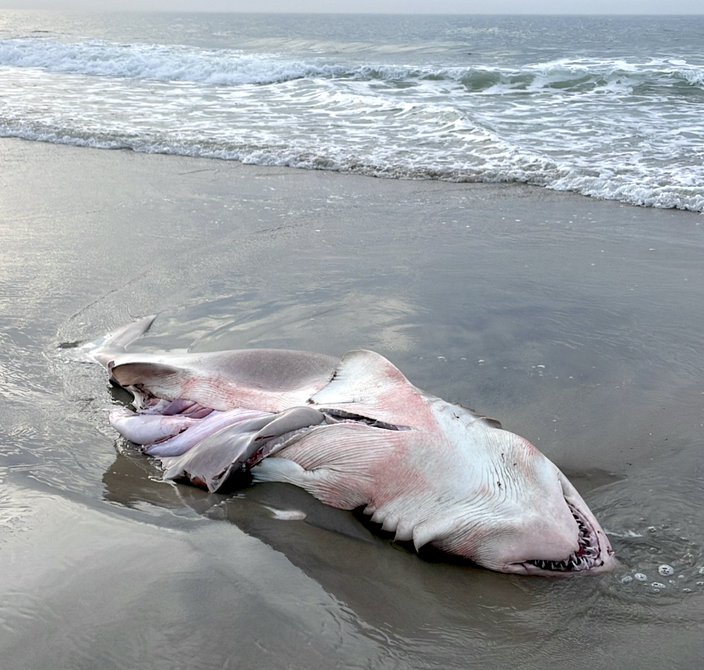 The sand shark found in Longport on Thursday morning showed signs of major injury and had been scavenged by shore birds.

The sand shark found in Longport on Thursday morning showed signs of major injury and had been scavenged by shore birds.
Several marine biologists who viewed the photos on Thursday afternoon confirmed that the animal is a sand tiger shark, also known as grey nurse sharks. They inhabit the Atlantic Coast and can be found inhabiting the continental shelf in temperate and subtropical waters worldwide.
"These animals are very common in the northeast and off New Jersey. They appear intimidating with their teeth, but are pretty docile sharks," said a spokesperson for the National Oceanic and Atmospheric Administration Fisheries. "In fact, they are a popular shark in aquariums given their fierce look, and because they do well in captivity."
The shark's teeth, although frightening to behold, are shaped in such a way that's suited to a diet of smaller fish species rather than larger mammals. Sand tigers generally range between 6 1/2 to 10 1/2 feet in length and are very rarely a threat to people, unless provoked. By comparison, the bigger and similarly named tiger shark belongs to a different genus and is known to be more aggressive toward humans, second only to great whites in reported attacks.
Experts said it would be difficult to determine how the Longport shark died without sample collection and further examination, but a member of the animal husbandry staff at Camden's Adventure Aquarium said it appears this shark was not preyed upon by other animals until after it died.
"Sand tiger sharks migrate up and down the coast and are typically found in Jersey waters from late spring to early fall," the aquarium staff member said. "The Delaware Bay is an important waterway for breeding, with the females regularly pupping in the bay. They feed on schools of fish, so it is common for them to come close to shore, but there are very few human interactions outside of shark fishing."
Keith Dunton, a marine biologist at Monmouth University, suspects the shark may have died after an encounter with a fisherman before washing ashore in Longport. Dunton runs an active research program at Monmouth that examines the land-based shark fishery in New Jersey. His team has tagged hundreds of sharks along the coast to monitor their populations.
"Sharks in general have low natural mortality," Dunton said. "It is highly likely that given the location and timing, this shark was captured and released by an angler. Sand tigers, like many sharks, do not handle being captured very well and it is a stressful event for them. Some sharks can die days to weeks later from the stress induced from being captured."
The way sand tigers eat also could offer clues about whether the one in Longport's death was connected to fishing.
"Sand tigers, in particular, are also gulp feeders, and tend to also swallow the hooks, making the hook remain lodged in its stomach — anglers cut the leaders and leave the hook — which is obviously not good for the animal," Dunton said. "It also appears that this shark has been cut open."
Sand tigers are a federally protected species, and it's unlawful in New Jersey for anglers to fish for them, specifically. The same is true for many species, including sandbar, dusky, angel and white sharks, among others. Despite the laws, some who surf fish will target these species from the shores of New Jersey, New York and Massachusetts.
"If an angler catches one of these species, they are supposed to keep it in the water and release it in a manner that is best for its survival," Dunton said. They shouldn't be kept on land for extended periods of time to take photos or to tag them.
Shark sightings of various species have become more common at the Jersey Shore in recent years. Not only is there more research being done to help understand and conserve sharks, but the availability of smartphone cameras makes chance encounters with the public more likely to be shared online.
Experts say shark conservation efforts play an important role in explaining the rising number of shark encounters along the East Coast. Great white populations, for instance, have rebounded due to federal protections covering both the sharks and their main prey, seals. The great whites move up the Atlantic coast during the summer months, peaking between August and October as they feed on a plentiful supply of seals.
In June, a 12-foot-long great white shark was filmed swimming around a fisherman's boat off the coast of Sea Isle City. And last week, global shark research organization OCEARCH tracked an 11-foot-long, 880-pound great white shark in the ocean near Atlantic City. That shark, named Freya, is one of many the research organization has followed closely over the years.
Longport police didn't respond when contacted Thursday about what authorities ultimately did with the sand tiger shark.
Michael Tanenbaum
PhillyVoice Staff
tanenbaum@phillyvoice.com
Wildlife
Sponsored
Prevention
Phillies
Music
Family-Friendly
Addiction
Entertainment
Travel
Alzheimer’s
Adult Health
Entertainment
Home Improvement
Adult Health
© 2022 WWB Holdings, LLC. All rights reserved