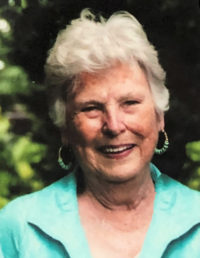 On the morning of Sunday, July 24, 2022, Geraldine “Jerry” Elaine Barbee completed her journey of faith at the age of 87. Jerry was born on July 29, 1934, in Atlanta, Ga.
She grew up in Durham, N.C., and was married to her high school sweetheart, A.J. Barbee, for 68 years. A.J. and Jerry relocated with their four girls to Statesville, N.C., in the spring of 1965. Jerry took great pride in raising their four daughters and will be remembered as a devoted wife, mother, grandmother, great grandmother and friend.
In their retirement, A.J. and Jerry were blessed to live at both the coast and in the mountains of North Carolina. Jerry loved shelling, bird watching, playing cards, the Carolina Tar Heels, golfing and most of all cooking and spending time with her entire family. Jerry was a faithful member of First Presbyterian Church of Statesville for many years and served on numerous committees and ministries.
Jerry was predeceased by her parents and her daughter, Kimberly Kay Barbee Brady.
She is survived by her devoted husband; daughters Stephanie Barbee Pope (Steven), Ann Barbee Speaks (Rodger), and Beth Barbee Davidson (Joe). Her grandchildren, who affectionately call her Nana, are Joshua Walden (Beth), Matthew Walden, Clay Speaks (Falon), Whitney Speaks Byrd (Jones), Caroline Speaks Ciampanella (Eric), Suzannah Davidson, Laurie Claire Davidson, Jason Brady and Jeremy Brady. She is further survived by her great granddaughters, Kylie, Harper, Hattie, Anna and Macie. Jerry will be missed by her loving family and her rescue kitty of 19 years, Foxy.
Celebration of Life services will be held on Thursday, July 28, at First Presbyterian Church of Statesville. Friends are invited to gather with the family in the Fellowship Room beginning at 3 p.m., followed by the service at 4 p.m. in the Sanctuary.
The family will be forever grateful for the excellent care, love and support provided by The Gordon Hospice House and her personal caregivers. Memorials may be made in Jerry’s memory to The Gordon Hospice House of Statesville, First Presbyterian Church of Statesville or St. Jude’s Children’s Hospital. Online condolences may be made to the family at www.troutmanfuneralhome.com.
Troutman Funeral Home is serving the family.